When Michael Daugherty talks about his background, you wonder at first how he ever got into sea kayaking.

A Midwesterner, he spent part of his childhood in Massachusetts and went on to get a degree in creative writing at the University of Iowa.

He and his wife, Rebecca, spent a couple of years in Greece before moving to Stonington in the early 2000s and then ran a fine art gallery there for more than a decade.

It was early on in their time on the rocky, granite island of Deer Isle that Michael decided to give sea kayaking a try. 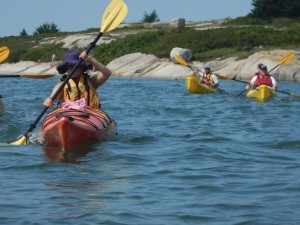 Little Camp Island is one of the islands in what Daugherty calls the Stonington archipelago. It is a favorite stop for paddlers because of views from the top of the island.
PHOTO COURTESY OF MICHAEL DAUGHERTY

“I basically started paddling then as an escape from the gallery,” he explained, going out after work as a way to relax. He said he found peace and serenity in spending time in the waters off Stonington.

He taught himself at first, and said it was a great place to learn because there was always an island or rocky outcrop nearby in case the weather or sea conditions changed. Depending on how one defines an island, there are as many as 75 islands in the immediate vicinity of Stonington.

“It kind of draws you on,” said Daugherty. “You tell yourself, ‘I’ll just go to one more.’”

He realized he needed to learn more about the fundamentals of kayaking if he was going to enjoy the activity safely. Once he had a certain amount of training under his belt, he went for and got a guiding license and took classes to become an instructor, which allowed him to lead others out on the water.

Daugherty got his start working for Old Quarry Ocean Adventures in Stonington, where he still guides today in addition to working for Ellsworth-based Pinniped Kayak.

Though it’s in Stonington, Old Quarry is not located in the community’s downtown. It can be found instead on Buckmaster Neck on the shores of Webb Cove. Daugherty said the location provides great access and allows people to kayak without having to compete with lobster boat traffic in the town’s bustling fishing port.

Old Quarry — which takes its name from a nearby, defunct granite quarry — offers everything from kayak rentals and kayaking lessons to half-day and full-day kayak tours with guides such as Daugherty. He said one of the things he likes best about the area is the density of islands, in what he and others call the Stonington archipelago. 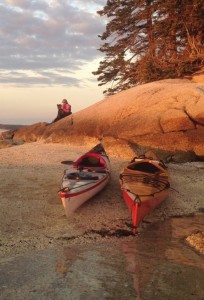 Sitting on a granite outcropping overlooking a small sand beach is the perfect place to take in a sunrise or sunset. The islands off of Stonington offer many such locations.
PHOTO COURTESY OF MICHAEL DAUGHERTY

“It’s beautiful, with that pink, Deer Isle granite,” he said of the islands. “There are a lot of sort of hidden gems out there.”

Among his favorites is Wreck Island, which is owned by the Island Heritage Trust. The island has smooth, granite formations, a couple of trails and a nice sand beach as well. It was inhabited in the mid-1800s, Daugherty said, and remnants of that history can still be seen today.

“I just like that it’s a beautiful place,” he said.

Another favorite destination is Steve’s Island, a very small island a mile or two offshore of Stonington. Daugherty said you can see the lights from town at night, and the island is small enough that you can walk around it in five or 10 minutes. There are also several campsites there.

“I like the small islands like that a lot because you never forget that you’re on an island,” he said.

Wildlife seen on trips in and around the archipelago include many seals (although Daugherty steers clear because kayaks tend to bother the animals), birds from eagles to ospreys and land animals such as deer, raccoons and mink.

Daugherty said when he started kayaking it was mainly “point-A-to-point-B type paddling,” but that as time went on he became focused on simply enjoying being out on the water.

Daugherty, author of “AMC’s Best Sea Kayaking in New England: 50 of the Best Coastal Paddling Adventures From Connecticut to Maine” published earlier this spring, says the best way for people to learn how to kayak is to take a lesson, rather than just attempting to do it on their own or to learn by watching a YouTube video. 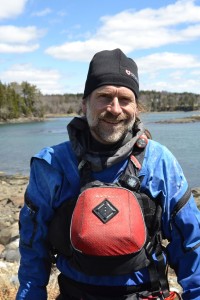 Michael Daugherty has been sea kayaking for more than a decade. He started doing it as a way to wind down after work, and now guiding and gives lessons is his profession.
PHOTO BY STEVE FULLER

“I couldn’t have learned what I learned without taking lessons,” he said.

One important lesson to remember, he said, is how you dress when going out in a kayak.

“You dress for the water temperature and not the air temperature,” he said. “If you end up in the water and if you’re not dressed for it, things might not go well.”

Daugherty recommends wearing waterproof outerwear, such as a dry suit, to keep from getting soaked while on the water. How many layers should be worn underneath the outer layer depends on the temperature that day.

Classes at Old Quarry teach safety and basic strokes that kayakers use while out on the water.

Steve Fuller worked at The Ellsworth American from 2012 to early 2018. He covered the city of Ellsworth, including the Ellsworth School Department and the city police beat, as well as the towns of Amherst, Aurora, Eastbrook, Great Pond, Mariaville, Osborn, Otis and Waltham. A native of Waldo County, he served as editor of Belfast's Republican Journal prior to joining the American. He lives in Orland.
Share
Facebook Twitter Google+
Prev Post / Next Post