Bare, Devil, Wreck, Potato, No Man’s and McGlathery are among the several dozen small islands, ledges and rocks scattered off Stonington in the Deer Island Thorofare. Some of the varied land masses — some semi-submerged when the tide is high — are named for their physical shapes and traits while others hint at shipwrecks or a lonesome ram kept separate from the ewes outside of breeding season. They are all fodder for firing the imaginations of the many sea kayakers who have paddled among them for decades.

Rebecca and Michael Daugherty are among them. The couple, who run Sea Kayak Stonington, lead tours among the archipelago of islands and beyond from this largely commercial fishing port on the southern end of Deer Isle. They tailor outings to the kayakers’ paddling, skill level, experience and comfort on the water. Wind speed and other weather conditions are considered too.

The Daughertys consider Stonington as one of the best departure points for sea-kayaking in coastal Maine. They should know, having taken a summer off from work a few years ago to explore the Maine Coast’s islands, inlets and communities from southern Maine’s Casco Bay to the far-flung Bold Coast in the Downeast region. To prove their point, Michael lets the chart — a nautical chart showing Stonington and cluster of islands — do the talking.

On Green Island, a former granite quarry serves as a refreshing swimming hole for Michael Daugherty and other kayakers. PHOTO BY REBECCA DAUGHERTY

“We have all these islands in between us and Isle au Haut [high island off Stonington],” he explained. “It’s actually more islands than it even looks like because this is a fairly large area.”

The couple note that more than half of Stonington’s nearby islands have public access. Some are a part of the Maine Island Trail, a 375-mile trail featuring islands where the public is allowed, stretching from the New Hampshire border to Canadian Maritimes.

“In some ways, I would say that our business model is a product of our place,” Michael Daugherty said.

Sea Kayak Stonington doesn’t do cookie-cutter outings. Every trip is somewhat customized to the particular paddlers. Not only does this keep customers happy, but it keeps things interesting for the guides. 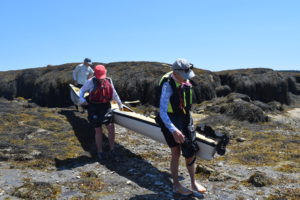 Sisters Jane Markel (front) and Paula Greenlee (rear) and their close friend Holly Duffy prepare to launch a kayak in the water.

“When guides do the same thing every day, it’s a challenge to not become complacent,” Michael said.

Sea Kayak Stonington offers short, half-day, full-day and multi-day excursions. Depending on the length of the trip, and people’s interests, one of five skilled guides leads outings to one or multiple islands.

Not too long ago, the Daughertys were just like some of their customers: beginners. The couple moved to Stonington to open an art gallery in 2003. Michael, a former Midwesterner with a background in creative writing, and Rebecca, an artist, had previously lived on the Greek island of Patmos working as archival assistants to a poet. Having lived in Iowa before that, they didn’t want to be landlocked again. So, they chose the Maine coast when it was time to move on.

After moving to Stonington, Rebecca wanted to learn to sail. Michael, on the other hand, was more interested in kayaking to the tiny, neighboring islands.

As Michael got more passionate about kayaking, he persuaded Rebecca to start — which kind of worked. Before learning how to kayak, she built her own the craft. She still paddles the wooden kayak today.

On a bright Sunday morning, Rebecca recently led a group of six on a short excursion. The kayakers safely paddled around a lobster boat race — a Maine summer staple — one in a circuit of races held in different harbors throughout the summer. 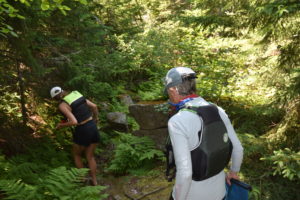 Mary Jane Markel was among the paddlers whose skill levels varied. She described her own paddling ability as “medium-rare.”

The first stop was Little Camp Island, southeast of Stonington, which offered stunning views. A variety of wildflowers were in bloom. On the right day, it isn’t uncommon to see a few sailboats pass by.

Farther south, the paddlers put into Green Island. An old granite quarry, filled with water less cold than the ocean, serves as a local swimming hole.

It’s the perfect place to take a refreshing dip. If they’re up for it, paddlers jump off the granite rocks and into the water.

A full-day excursion can include a little bit of water time and a whole lot of island exploration time — it’s up to the clientele. Plus, Michael, Rebecca and the other guides enjoy teaching people as they go.

Vacationing in Stonington, Yarmouth resident Lisa Clark and her teenage daughter Lexi Clark were among the other paddlers in the outing led by Rebecca.

“It’s just beautiful,” Lisa summed up. “It’s a beautiful day to be out on the water [and] see all the islands.”