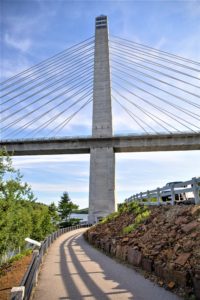 From Fort Knox, the Penobscot Narrows Bridge and Observatory is reached by a path. Inside the granite-sheathed tower, an elevator transports the public up 420 feet to the observation deck. OUT & ABOUT PHOTOS BY MATTHEW LITMAN

The Penobscot Narrows Bridge and Observatory is where old meets new.

The cable-stayed bridge, which soars over the Penobscot River, shares the same shore with the 160-year-old Fort Knox. From the fortress, walk down a path, through shaded trees, look up and you’ll see the Penobscot Bridge’s lofty observation tower. At the tower’s base, visitors take an elevator that whisks them 420 feet in the air in 48 seconds. Emerging onto an enclosed deck, a panoramic view unfolds of Mount Desert Island to the east and the Camden Hills to the west. Far below, traffic rushes across the bridge linking the towns of Prospect and Verona Island. Another span connects motorists to Bucksport and beyond.

Dean Martin, Friends of Fort Knox’s executive director, says “over 100,000 people” a year visit both Fort Knox and the Penobscot Bridge Observatory. The Friends of Fort Knox manages Fort Knox State Park, which encompasses the fort and the 42-story observation tower. The latter has the distinction of being the world’s tallest bridge observatory. It’s even higher than the Statue of Liberty.

For Mainers, Fort Knox and the Penobscot Bridge, whose twin towers’ pyramidal tops resemble the Washington Monument, are particular sources of pride.

“It’s a Maine thing,” Martin says. The pride “comes out in every one of the workers that I work with here.”

The Friends’ director calls the 19th-century fort a “masterpiece of modern engineering.” He sees the 2,120-foot modern span as an equally remarkable structure. Both structures feature locally quarried granite.

Built from 2003 to 2007, the Penobscot Bridge replaces the aged Waldo-Hancock Bridge — Maine’s first long-span suspension bridge — constructed in 1931. The latter was deemed unsafe when the Maine Department of Transportation unexpectedly discovered that the 71-year-old bridge’s main suspension cables had severely corroded, hastening its replacement. 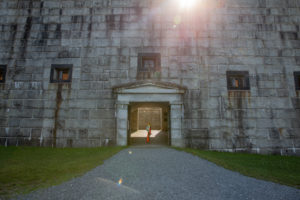 During a public workshop, the local community suggested the new bridge feature granite as a nod to the stone’s place in state and local history. In the early 20th century, Maine boasted a wealth of 120 working quarries from which stone was shipped by schooner and used to pave streets and construct buildings in cities along the Eastern Seaboard. The John F. Kennedy Memorial in Arlington, Va., for instance, contains gray granite quarried on Crotch Island south of Stonington.

“Once you get hooked, there’s a love for being part of Fort Knox.” — Dean Martin, executive director, Friends of Fort Knox

Accordingly, the observatory’s lobby and terrace, as well as its observation deck, are laid with granite quarried from the Mosquito Mountain Quarry just upriver in the town of Frankfort and from Deer Isle. The tower’s lobby also was designed to resemble the entry gates to Fort Knox.

Constructed in 1844, Fort Knox was built to repel British naval incursions at the mouth of the Penobscot River. During the American Revolution and War of 1812, the British actually occupied the river region, stretching from Castine to Bangor. The granite fort was garrisoned with its first troops in 1863 during the Civil War, but never saw any military action. Visitors can wander freely inside the fortification, pass through its arched chambers, mount the spiral staircases and roam the grassy-topped ramparts, from where great howitzer cannons were fired. Original, restored weaponry is on display. 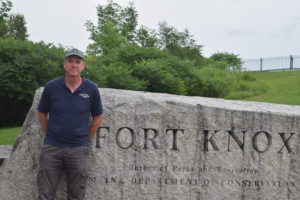 As a veteran, Friends of Fort Knox’s executive director Dean Martin takes his job personally to preserve and promote the historic installation.

Martin, a decorated veteran who served as a combat medic and hospital administrator for just over 24 years, was born in Wiscasset and lives in Orland with his family. He completed his basic military training in Fort Knox, Ky., and the irony is not lost on him.

“Once you get hooked, there’s a love for being part of Fort Knox,” said the veteran, who relishes his role as the historic site’s steward. “And I’m inspired by that.”

In his second year as the Friends’ director, Martin is battling with the COVID-19 pandemic’s economic fallout. The fortification’s operating funds are derived from ticket sales for both the fort and observatory. So far this season, only half of last year’s revenue has been taken in. The nonprofit’s biggest fundraiser is “Fright at the Fort,” a multi-day event during which visitors navigate dense fog and are spooked by costumed volunteers and flashing strobe lights in the narrow passages. 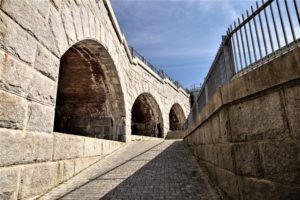 At Fort Knox, a precisely granite-paved road leads up past the brick-inlaid, vaulted chambers — called casements — where cannons were positioned and fired from.

Still, the fort and observatory are open and remain a suitable destination for vacationers and local and seasonal residents. At the fort, visitors have plenty of space to social distance. Facial coverings are required in areas where social distancing is not possible. Signs designate one-way exits and remind the public of safe health practices.

At the bridge, a maximum of eight people are allowed at any one time in the observation tower. The elevator’s interior and observation deck are regularly sanitized.

“We want to make sure the park is safe for all families,” Martin says. “[Everyone] should feel safe walking through here.”