As a Midwesterner, the sight of my first Maine lobster was intimidating: 2 pounds of cooked meat hidden inside the crustacean’s formidable red shell. I was still reeling from having seen this very lobster thrown into a boiling vat of water a mere 15 minutes earlier.

A variety of tools lay in front of me — a shell cracker, a pick and a very stylish lobster-themed bib — but I didn’t know what to do with any of them (the bib being the one exception). The lobster’s succulent meat was calling to me, waiting to be liberated from the shell, but it was going to take a lot of work.

My only previous experience with Maine’s signature seafood was eating a lobster roll from a roadside stand, where someone more skilled than I had already done the hard work of extracting the meat from the shellfish. Luckily, I had Brian Langley to guide me. 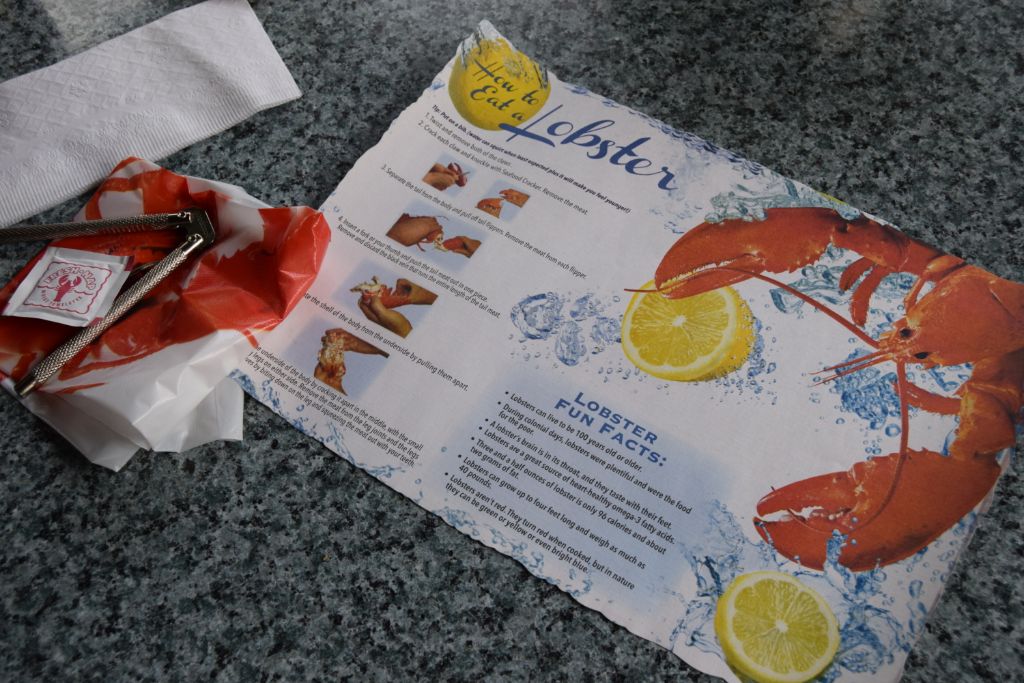 A variety of tools are needed in order to properly crack open a Maine lobster, all of which are provided to customers at the Union River Lobster Pot in downtown Ellsworth.

Langley, chef and owner of the Union River Lobster Pot in downtown Ellsworth, and his wife Jane built the riverside restaurant in 1996. With an extensive culinary background, he serves a combination of innovative dishes and coastal classics to over 30,000 people every summer.

Langley started out cooking traditional European dishes at his former seasonal restaurant, the Oak Point Lobster Pound in Trenton, because that was what he had been trained to do. He eventually changed course after realizing what people really wanted to eat when they traveled to the Maine coast: lobster.

“I realized I needed to sell what people want to eat, not what I want to cook,” he said.

At the Lobster Pot, Langley serves everything from freshly harvested lobsters from the fishing port of Stonington to fish tacos and steak with bacon marmalade for diners seeking an alternative to seafood. He has had a hand in creating every dish on the restaurant’s menu, which he said has something for “everyone but vegans.”

For 27 years, Langley taught culinary arts at Hancock County Technical Center in Ellsworth. He also served four terms as a state senator for District 7. His lengthy cooking and teaching career, combined with 20-plus years of handling and cooking lobsters, made him the perfect guide to eat a whole lobster. He vowed no piece of meat, no matter how small, would be left behind. 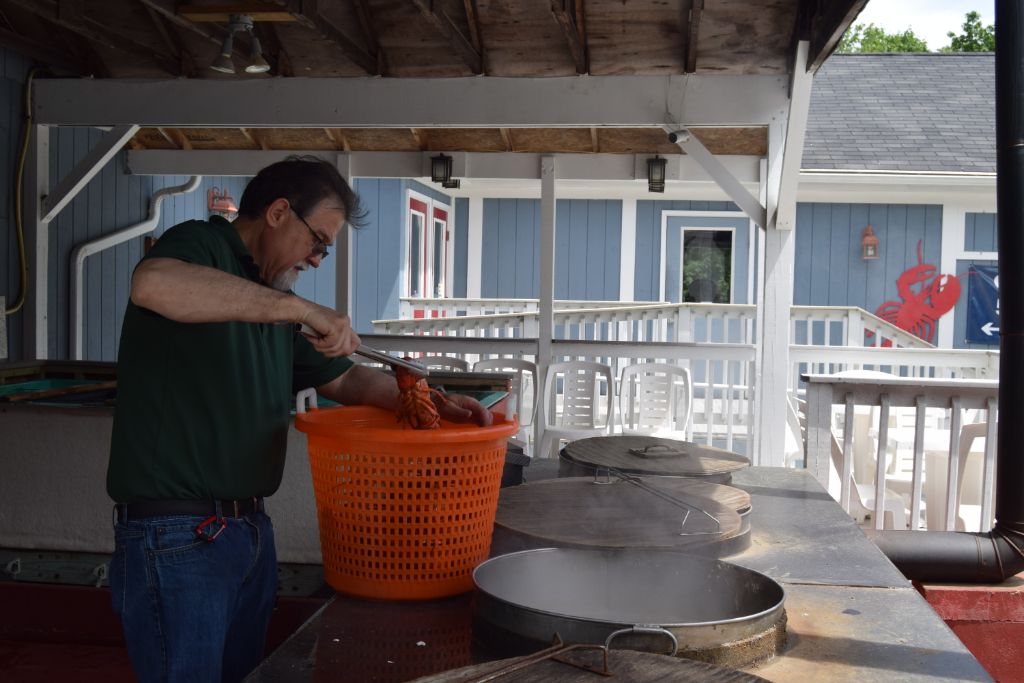 Brian Langley collects lobsters from a vat of water to cook. Langley is the owner of the Union River Lobster Pot.

Langley showed extraordinary patience, walking me through the multi-stage process and fielding embarrassing questions such as “Where do I start?”

The first step, Langley says, is to rip off the boiled lobster’s claws. With the cracker, you then grip the claw in the middle and squeeze hard. The shell might not crack at first, but don’t be discouraged. Just focus all energy on the tool in your hand and think about how worthwhile it will be to eat food you worked for.

As Langley said, “It’s food that fights back.”

Once the claw eventually breaks open, you can use your pick to dig out the meat. The most skilled lobster-eaters can get it all out in one piece. As a novice, it took me a few tries to clean out the inside. Once you’ve got a substantial piece on your fork, go ahead and drench it in some melted butter. But, don’t forget to squeeze some lemon in first; Langley said the subtle tartness of the lemon adds a whole other layer to the experience (he’s right).

After repeating that process on the second claw and the knuckles, move on to the next step. The tail often is regarded as the best body part and is occasionally served on its own. Because it’s the muscle that moves the lobster, it is different, slightly tougher meat.

To access the tail meat, you must grasp your lobster with one hand and twist the tail off with the other. Beware: this step may result in getting sprayed with some “lobster juice.” That’s what the bib is for.

“That’s also why we give you lots of napkins,” Langley joked. 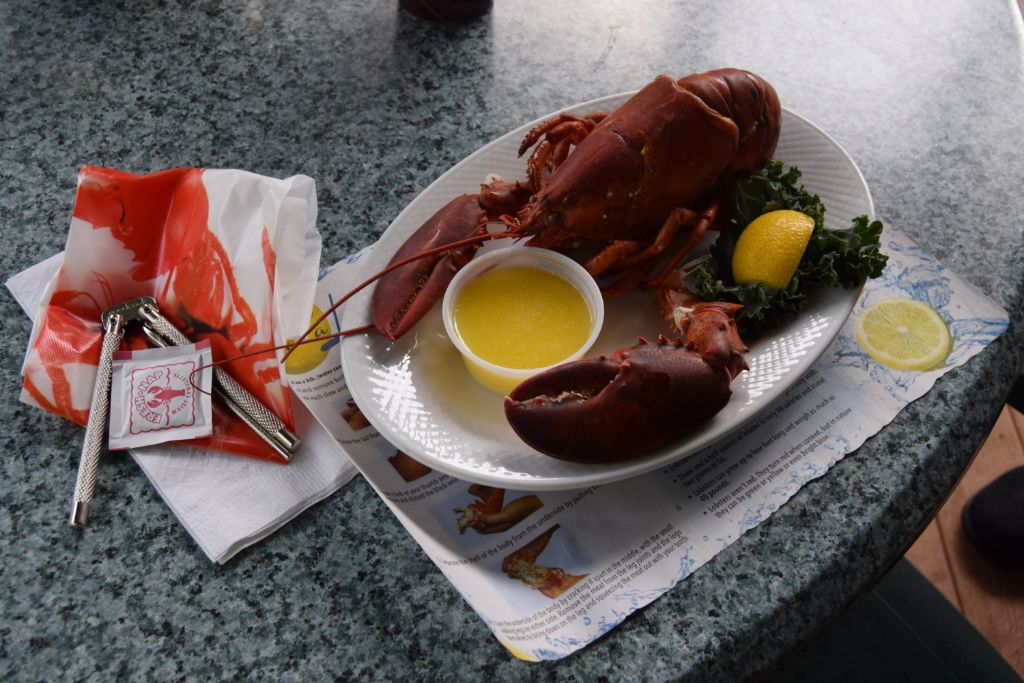 While customers can order a variety of sides to go with their lobster dinner, Langley said a simple combination of melted butter and lemon works best.

Once the tail has been separated, you may notice a green substance spilling out. Don’t be alarmed, like I was at first. That’s the tamale, or the lobster’s liver. It’s not to everyone’s taste, so feel free to leave it to the side. Even Langley himself isn’t a fan of the tamale’s distinct flavor.

Now, holding the severed tail, bend the lobster’s fins back and break them off in twos or threes.

“They’ll come right off,” Langley said. “And that will leave you an opening into the tail.”

Before diving into the tail, remember that we’re leaving no meat behind. The fins usually contain a small amount of meat that can be easily picked out.

Now, put your thumb into the opening left by the fins, and try to push the entire tail out through the other end. Once you’ve pushed it halfway, grab the tail meat and pull it out. Next, remove the small black intestine that runs through the length of the tail like a tube. You’re now left with a fully intact tail just waiting to be dipped into some butter.

Now, turn your attention to the legs. They are small and skinny, but there’s still some meat inside. Once you twist off all the legs from the main body, you can simply bite down, squeeze and suck out the meat.

Finally, after all that work, there’s still some meat left. Use your pick to pry every bit from the body, which Langley likens to crabmeat. Each part of the lobster has meat that tastes a little different, something that makes the experience all the more interesting. 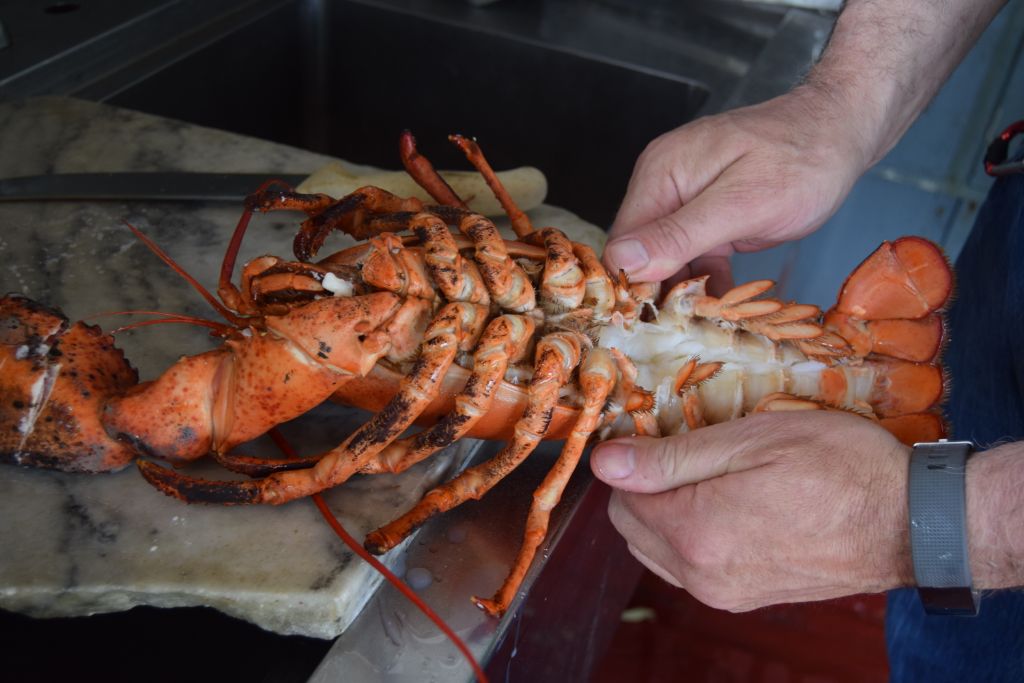 Langley points out the different parts on a typical lobster. Each part of the lobster contains meat that tastes slightly different from one another.

After about 45 minutes, I was left with the empty remains of my lobster, having cleaned out all the meat with Langley’s guidance. I was tired, covered in butter in odd places (how did I manage to get some on my elbow?) and very, very full.

I had just consumed my first Maine lobster, which was both delicious and especially satisfying after all the work. The fact that I got to eat inside The Lobster Pot with a beautiful view of the Union River was an added bonus.

Eating a Maine lobster isn’t just a meal, it’s an experience. That’s why Langley said everyone who visits Maine needs to try consuming a whole one. The most important thing to remember when cracking it open?

“Don’t break out your wet napkin too early,” Langley laughed.

The Lobster Pot is located at 8 South St. in Ellsworth. For more information, call 667-5077, or visit lobsterpot.com.