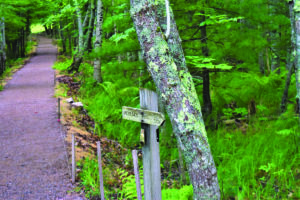 Acadia National Park’s Hemlock Trail is a perfect place for a leisurely stroll and some birding. The lichen’s pale greens sharpen on a foggy day.

We walk slowly along Acadia National Park’s Hemlock Trail, on the lookout for a family of barred owls. A jogger stops, excitedly telling us she saw one perched just 200 yards away. A man passing by later reports having seen one glide over the trail. Rich MacDonald, our tour leader, briefly hears a hiss coming from the woods, which he identifies as a young owl asking its parents for food. 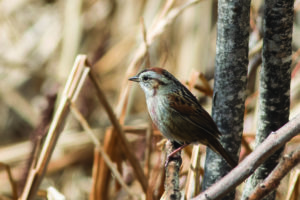 The suspense of birdwatching has come to dominate the mood of our five-person group, after what began as a leisurely morning at Sieur de Monts Spring on misty Mount Desert Island. MacDonald and I are joined by Downeast Audubon Treasurer Katherine Strater and Elana Graceffa, a visitor from the Boston area, along with her son, Ian McGeachie, a disarmingly attentive 8-year-old.

Patiently searching for birds is nothing new to MacDonald, the thick-bearded, binocular-clad naturalist, guide, author, birdwatcher and co-founder of The Natural History Center. The Bar Harbor-based education organization runs a variety of nature and adventure trips on land and sea and helps Acadia visitors plan their trips. Tours are conducted year-round. Bird lovers visiting in September can hope to see migrating hawks, sandpipers and plovers on weekly birding tours. 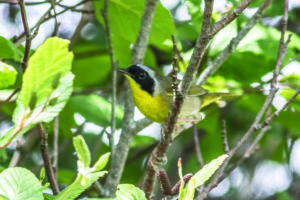 This is a birdwatching tour, but just as importantly, MacDonald tells us, it is a bird listening tour. Calls and songs draw the listener’s attention to birds that may be deep in the trees or hidden from sight. Sounds also can provide more information about a bird and its condition than a brief sighting might.

“Birds have more than one vocalization. We think of chickadees, and they say, ‘chick-a-dee-dee-dee,’” MacDonald says, by way of example. 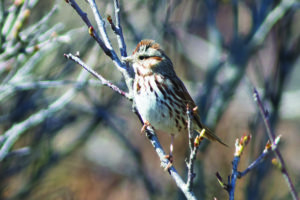 To photograph song sparrows, it requires knowledge, speed, and a high-quality camera to catch them up close. RICH MACDONALD PHOTO

More “dees,” he specifies, means more perceived danger. Other nearby birds recognize the call, and in turn become more aware of potential predators. The deeper one gets into birding, the more involved it becomes.

“Birding to me is about so much more than just the identification of the bird,” MacDonald explains. “It’s habitat, it’s conservation, there’s culture, there’s constant change.”

Be on the lookout for “edges,” he instructs the group. Birds tend to congregate at the meeting point of two habitats, like the transition from forest to meadow or pond to parking lot. Sure enough, as we pass from hemlock forest to alder swamp, a group of black-capped chickadees and some black-throated green warblers buzz around the treetops.

MacDonald has a remarkable ability to pick out and identify bird calls or name the species and approximate age of a small bird only in sight for a few seconds. He has been studying birds and guiding in Maine since 2002. In December 2020, he published “Little Big Year,” an account of his experiences birdwatching in Hancock County in 2018. The book is narrated as if he was chatting with friends over a beer after a long day out birding.

“There are lots of ways to share information,” MacDonald says. “I figured out early on that with people, it resonates when you tell them stories.”

Fortunately, MacDonald is a man of many stories. Some are from his childhood job of banding birds in upstate New York near Niagara Falls — and getting repeatedly pinched by beaks. Others come from his many excursions as a nature guide in Antarctica, where he has worked for Happy-Lloyd Adventure Cruises.

Recognizing the pollution caused by the 6,390 miles he drove for “Little Big Year,” MacDonald is now undertaking a “Zero-Emissions Little Big Year,” for which he has already ridden his bicycle 1,800 miles.

As we encounter birdwatchers along the trail, a community comes into view. We tell fellow watchers of the red-eyed vireos, eastern wood pewees, black and white warblers and goldfinches we have seen or heard.

We never find that family of owls. They could have moved farther from the trail or been nearby the whole time, 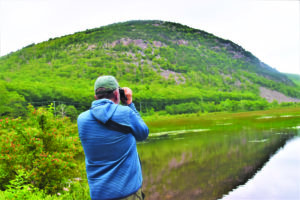 Rich MacDonald tries to identify two waterfowl gliding above The Tarn, about one third of a mile from Sieur de Monts Spring in Acadia National Park.

camouflaged in the woods. That’s part of the intrigue, the appeal, MacDonald says. You don’t always see what you hope to, but you’re hooked. You come back sooner or later to find it.

In the meantime, MacDonald has plenty to keep him busy. He has rare birds to spot, trips to lead, books to write, classes to teach at College of the Atlantic, and, perhaps most pressing, axes to grind with movie editors who show a bald eagle and dub in the call of a red-tailed hawk.

For more information about The Natural History Center, call 266-9461 or visit thenaturalhistorycenter.com or the organization’s Facebook page.