On a carriage road before crossing the Duck Brook Bridge, Acadia National Park Ranger Nikki Hermann asks our guided group of bicyclists whether they would support the creation of a carriage road system such as the one philanthropist John D. Rockefeller Jr. began building for the public’s pleasure 108 years ago. 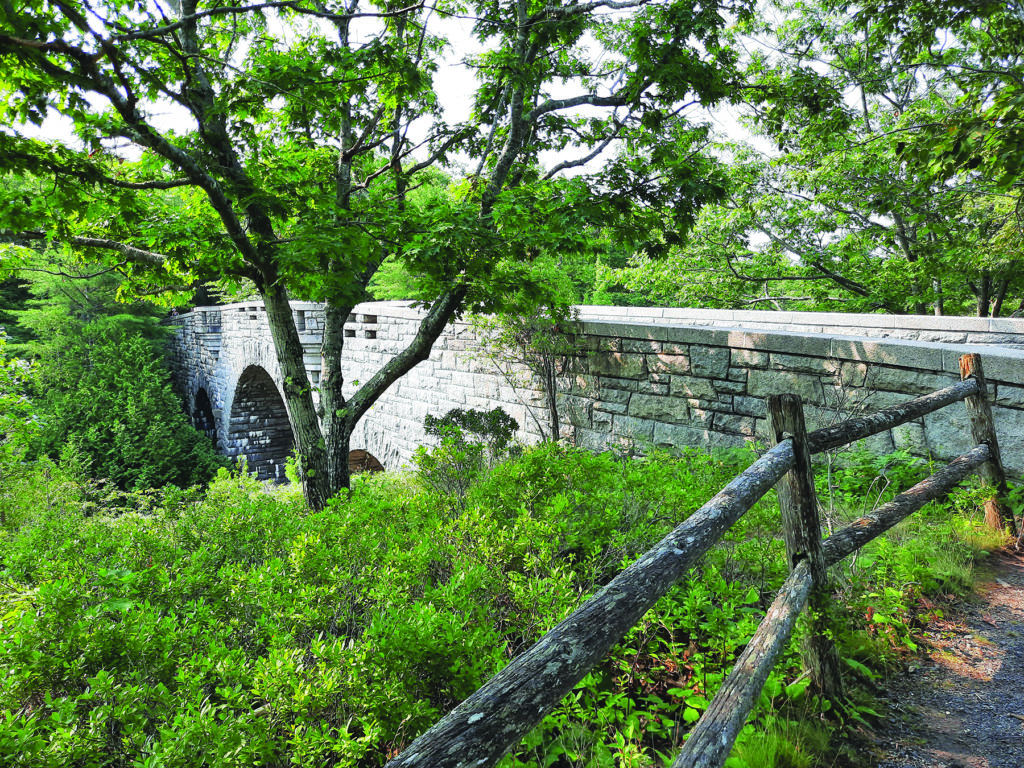 “I’m not a hiker, but I can do this road and see the beauty here,” responded 54-year-old Morgan Kuhl of Carmel, N.Y. Vacationing in Maine, Kuhl works as general superintendent of the New York City Sanitation Department. “But I wouldn’t want it [to change] too much, because you don’t want buildings all over this place.”

Similar thoughts were not lost on Rockefeller. Before Acadia’s 45-mile carriage road system was conceived, Rockefeller and his father, John D. Rockefeller, shared a love of the outdoors and the two laid out carriage roads, built stone bridges and designed dams to create ponds and lakes at the family’s estate Forest Hill in Cleveland Heights, Ohio. 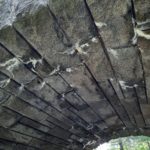 Eventually acquiring a summer home on Mount Desert Island, JDR Jr. sought to create a motor-free way for the public to explore the valleys and mountains and other features in the island’s interior. The financier also wanted to preserve the wildly beautiful scenery for the enjoyment of generations to come. A skilled horseman, with an engineer and landscape designer’s mind, Rockefeller set about designing and having built the roads, featuring 17 stone-faced bridges, which ascends rises and passes by streams, ponds and lakes. The project took from 1913 to 1940 to complete.

“He [Rockefeller] knew the new Park Service was never going to build something like this,” Hermann said. By the 1930s, the philanthropist had donated 11,000 acres of his own island land to the National Park Service. Acadia is the only national park to be entirely donated by private landowners, she said. “So, he built it himself before giving us the land.” 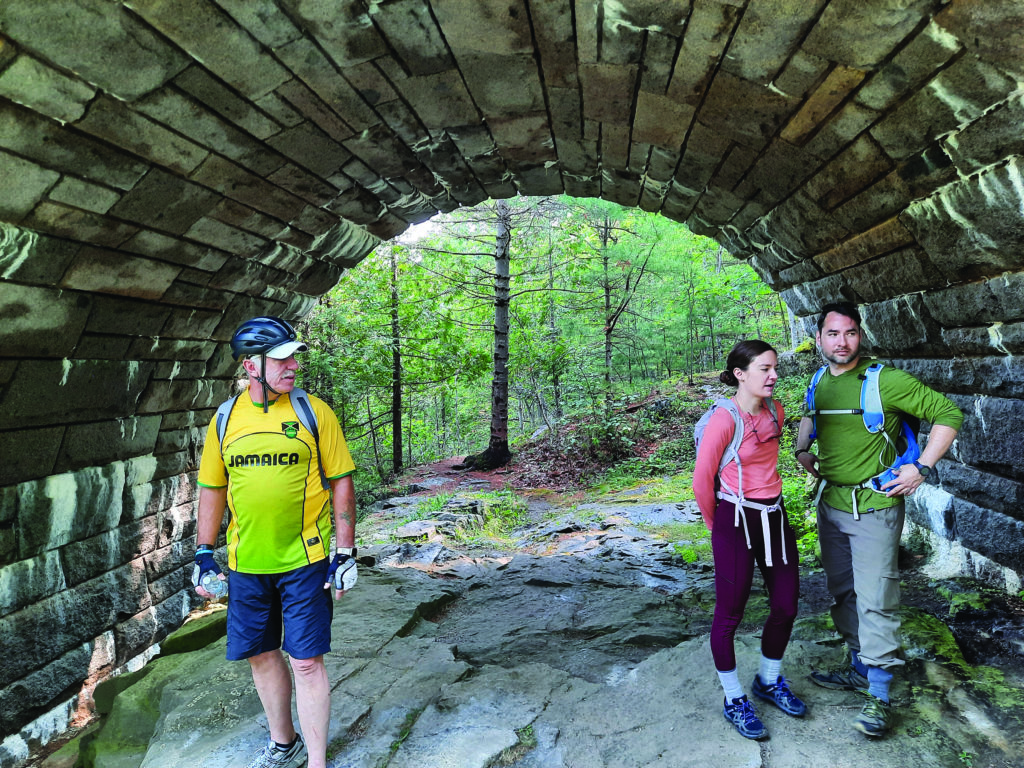 Under Acadia National Park’s Duck Brook Bridge, the ranger-led bike tour’s participants check out the stalactites, a natural phenomenon in which rainwater drips through the structure and creates icicle- like formations.

Today, runners, hikers and bicyclists can travel Rockefeller’s roads to take in the same views that captured his heart more than a century ago. To inform and enhance the public’s appreciation of Acadia’s unique carriage roads, Bar Harbor’s Acadia Bike partnered with Acadia National Park to offer ranger-led tours along the hard-packed gravel paths. These trips take riders of all skill levels (ages 8 and up) on a 6-mile ride in the shadow of Cadillac and Dorr mountains, around Witch Hole Pond and to Duck Brook Bridge. Acadia Bike charges $59 per person and the fee includes use of rented bikes for the remainder of the day.

“It just gives all the visitors to Acadia … a better, more well-rounded experience,” said Paul Bridges, Acadia Bike’s tour guide and bike technician. “Knowing the backstory, I think, is a great part of what this particular tour offers.” 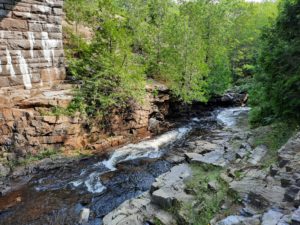 At Duck Brook Bridge, tour participants can descend a path or stone stairs to cool off and explore the ledges.

In today’s tour, Hermann provides that backstory to our group of 20 bikers as we ride the roads. During the 2.5-hour trip, the 32-year-old ranger educates the group about beavers and how they affect the park’s waterbodies and explains how the various mountain peaks were rounded by glaciers 20,000 years ago. She also tells us about Bar Harbor’s Great Fire of 1947, which engulfed more than 10,000 acres in Acadia.

“It not only changed the landscape, but it changed the way that life was on the island,” she said about the week-long fire, noting that hundreds of destroyed summer homes were not rebuilt. “They were replaced by hotels and motels. So, it’s part of the reason why you all get to come here today.”

During the outing, Along the trip, bikers learn how locally quarried granite blocks serve as guardrails — referred to as “Rockefeller’s Teeth” — along the roads. Ferns, blueberry shrubs and other native plants soften the effect. The subtle touches are the hand of American landscape designer Beatrix Farrand, who Rockefeller enlisted to help with the carriage roads project. The horticulturalist had designed JDR Jr. and his wife Abby’s own formal gardens at their summer home, The Eyrie, in the Mount Desert village of Seal Harbor. Her expertise helped integrate the carriage roads into the environment — one of Rockefeller’s aims.

In her 1990 book “Mr. Rockefeller’s Roads,” Rockefeller’s granddaughter Ann Rockefeller Roberts wrote, “The grade of each segment, the degree of curvature, and the line of the road had to carry viewers so smoothly from one spot to another that they would not be aware of the transitions.”

At the Duck Brook Bridge, our group stops learns that the 43-foot-high span is the highest of Acadia’s 17 stone bridges and considered the “grand northern terminus” by Rockefeller of his carriage road system. There, a foot path leads down to a brook’s racing waters.

On the bridge’s other side, a stone staircase takes one down to its base. The structure’s underside is covered with stalactites, a naturally occurring phenomenon in which rainwater drips through and creates icicle-like formations. The droplets’ minerals harden creating formations resembling crusty cake frosting.

“It’s neat to see this in a natural form on a man-made structure,” Bridges said, noting that this process usually occurs inside caves.

At the tour’s end under the Eagle Lake Bridge, riders can either ride back to the Hulls Cove Visitor Center with the ranger or freely cruise around the park. Hermann recommends heading south past the lake and Bubble Rock to Jordan Pond. An Island Explorer bus holding a bike rack arrives there every 30 minutes to take people back to the Hulls Cove Center.

Acadia Bike Rentals hosts tours Mondays, Wednesdays and Fridays from 8:30 to 11 a.m. The tour costs $59 per person. People can keep their bikes until 5 p.m., but they must return them to the shop at Acadia Bike’s shop 48 Cottage St. in Bar Harbor. To see the bus schedule, visit www.exploreacadia.com/routefinder.html. To book a tour, visit www.acadiabike.com/bike-tours or call 288-9605.