Growing-up outside Philadelphia in the 1950s and ’60s, Peter Beerits loved the “Western” genre, then at its peak. He recalls watching the whirling cinematic gunfight scenes, offering brief, passing glimpses of a saloon and other scenes on a Hollywood set. 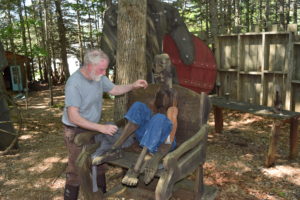 Sculptor Peter Beerits adjust one of his characters in Nellieville. OUT & ABOUT PHOTOS BY WILL SLATER 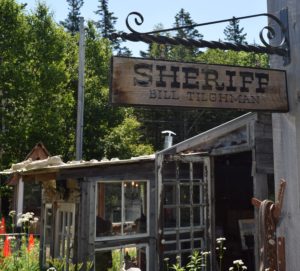 Growing-up outside Philadelphia in the 1950s and ’60s, Peter Beerits loved the “Western” genre, then at its peak. He recalls watching the whirling cinematic gunfight scenes, offering brief, passing glimpses of a saloon and other scenes on a Hollywood set.

“I used to wish that the camera would stop and I could walk around inside,” the Deer Isle sculptor remembers.

At Nervous Nellie’s Jams and Jellies, strolling among the artist’s life-size fanciful inhabitants and buildings of “Nellieville,” the camera stops. Viewers can fix their gaze on the saloon and jail of an Old West town, a “juke joint” in the Mississippi Delta, Arthurian Camelot and Neville Hardy’s now-closed Deer Isle convenience store as it looked decades ago or, to Beerits, only moments ago. The ever-evolving art installation is only one part of Nervous Nellie’s. In a tiny cottage, the kitchen staff concocts and packages 15 flavors of jam, jelly and chutney for sale on site and online. Behind the kitchen, a shop features these fruity concoctions, some of Peter’s sculptures and keepsakes such as tidal clocks, handmade ceramic mugs and aprons sewn specifically for Nervous Nellie’s.

In this multifaceted enterprise, Anne Beerits, Peter’s wife, keeps the trains running on time. The New Canaan, Conn., native’s professional life is dictated by a series of logistical challenges. In order to produce a year-round supply of each product, supply lines, production rates and storage management must be just so. Fruit often needs to be ordered a year ahead and relationships with farmers must be maintained. We talk for several minutes about the intensive process of freezing individual pieces of fruit. Recipe development must be exact, too. 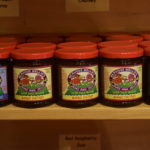 At Nervous Nellie’s. the kitchen staff concocts and packages 15 flavors of jam, jelly and chutney for sale on site and online.

“It’s not like making a beef stew, and just sort of tinkering, adding a little red wine or more salt, because you’re doing that once,” she said. “We gotta be able to replicate this.”

Anne and Peter are consumed by details of different kinds. Nellieville requires ongoing maintenance and reconsideration. Peter is always in search of new materials, like the barred doors from a former prison in Lewiston or the coffee maker from Hardy’s old store.

Peter’s recreations are not those of a historian, but of a romantic. He feels a “fundamental need” to creatively construct these spaces, all of which touched him.

Along with the Western movies and toys he grew up with, inspiration comes from travel. The juke joint came after two trips to the Mississippi Delta, still sauna-like in October, where he found both exoticism and familiarity.

“There was very heavy-duty logging there,” he recalls. “The people were very poor, even poorer than here, but proud that they belonged there, like people are in Maine.” 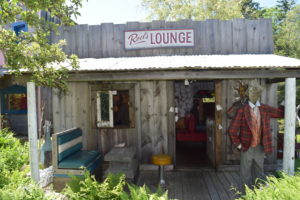 Visitors stroll among the artist’s life-size fanciful inhabitants and stop in at Red’s Lounge and other fanciful places.

Peter’s passion for the mythic old West came from Hollywood, but also from family.

“During World War II, my mother had stayed on a ranch on eastern Montana,” he says. “A woman was typically not allowed to go on cattle drives. During World War II, the men were in the Army and they needed people and she got to drive cattle … She would tell stories about it. [This is] part of trying to process that.”

Peter is soft-spoken and uncommonly earnest, surprisingly grounded for a man who spends his days bringing life to myths. He credits Nellieville to a high school teacher named John Cederstrom, who took a young, struggling Peter under his wing and exposed him to sculpture. Remembering Cederstrom’s influence brings warm nostalgia and a pang of regret. 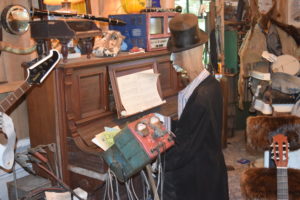 A piano player pounds out tunes at a “juke joint” in the Mississippi Delta.

“I always thought I was a failure ’cause I wasn’t selling my art or getting big shows,” Peter recalls of his early days as a professional artist. “When I finally realized I was doing OK and would have liked to get in contact with him, he died. So, he never knew and I’m sorry about that.”

Moved by myths, Peter also is taken with biblical stories and images. One sculpture on the outskirts of town depicts the Nativity scene. Another imagines Jesus addressing the disciples from a lobster boat. At the front of the Nellieville church, Peter has painted a Gospel passage, Matthew 11:28: “Come to me, all of you who are weary and loaded down with burdens, and I will give you rest.”

“I always loved this because I always feel really worn out, I mean this is a lot of work,” Peter says. “I always liked the idea of being able to get rest.”

And yet, day after day, for both Anne and Peter, each in their orbits, the work continues and the story unravels.

Nervous Nellie’s Jams and Jellies is located at 598 Sunshine Road, Deer Isle. For more information, call 800-777-6835 or visit nervousnellies.com or their Facebook page. First-time visitors should set aside an hour, Anne recommends.