Entering the Abbe Museum’s new exhibit “wolankeyutomon: Take Care of Everything,” visitors are greeted by an intricately woven pufferfish. It is crafted from brown ashwood and sweetgrass that are traditionally used in Wabanaki basket-making. Puffed out in a defensive mode, the sea creature confronts visitors, acting as a gatekeeper to the exhibit that lies ahead.

“He was supposed to have other sea life friends, but he was determined to be the center of attention,” said Frances Soctomah, the 27-year-old Wabanaki artist who created the sculpture. Pufferfish are a tropical fish — not found anywhere near Bar Harbor — but this is part of Frances’s artistic statement. In choosing the non-native fish and depicting it in its defensive state, Frances hopes to draw attention to the environmental crisis in waters around the globe.

Located on Mt. Desert Street in downtown Bar Harbor, the Abbe Museum showcases the rich history and present-day lives of the Wabanaki Confederacy, whose members include the Penobscot, Passamaquoddy, Mimac, Maliseet and Abenaki indigenous nations. At present, an estimated 8,500 Wabanaki live in Maine, with their traditional homeland extending down the New England coast and up into Canada. 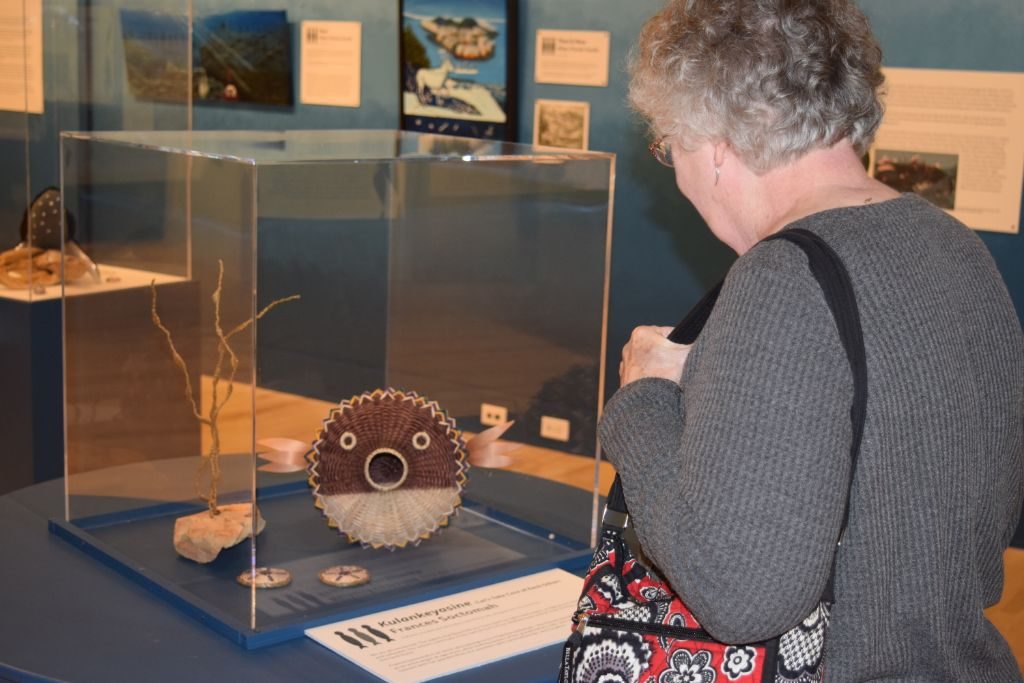 Frances Soctomah’s hand-crafted pufferfish, made from brown ashwood and sweetgrass.

In the Abbe’s permanent exhibit “People of the First Light,” visitors can admire the various Wabanaki tribes’ traditional canoes and dress, watch a video about their modern practices, and listen to oral stories about creation. The first and only Smithsonian affiliate in the state of Maine, the Abbe Museum features a second location at Sieur de Monts Spring, nestled in the heart of Acadia National Park. There, you can find museum founder Robert Abbe’s original trailside museum, complete with ancient Wabanaki artifacts and dioramas of pre-European life on Mount Desert Island. Abbe (1851-1928) was an eminent New York physician.

“Wolankeyutomon,” the museum’s newest exhibit, examines the interconnectedness of water, land and natural resources. Nine indigenous artists, working in painting, sculpture and weaving, express both the sacredness of water and the existential threats to local waterways and marine life today. The exhibit features a digital talk-back wall, encouraging visitors to share how they can help protect Earth’s water and sea life.

The show was created in partnership with Maritime Indigenous Artists Inc., a 2016 nonprofit organization representing authentic indigenous art from the North American East Coast, and was curated by organization leaders Allen and Norma Saulis. The couple live at Tobique First Nation in New Brunswick, Canada, and are featured artists themselves.

For Allen, the exhibit is intensely personal, expressing the responsibility humans have to protect the environment.

“Wolankeyutomon means take care of everything, take care of all the species we have left,” Allen said. “We [the Wabanaki] call them relations. At the end of a prayer we honor our relations, all the living things in the world.” 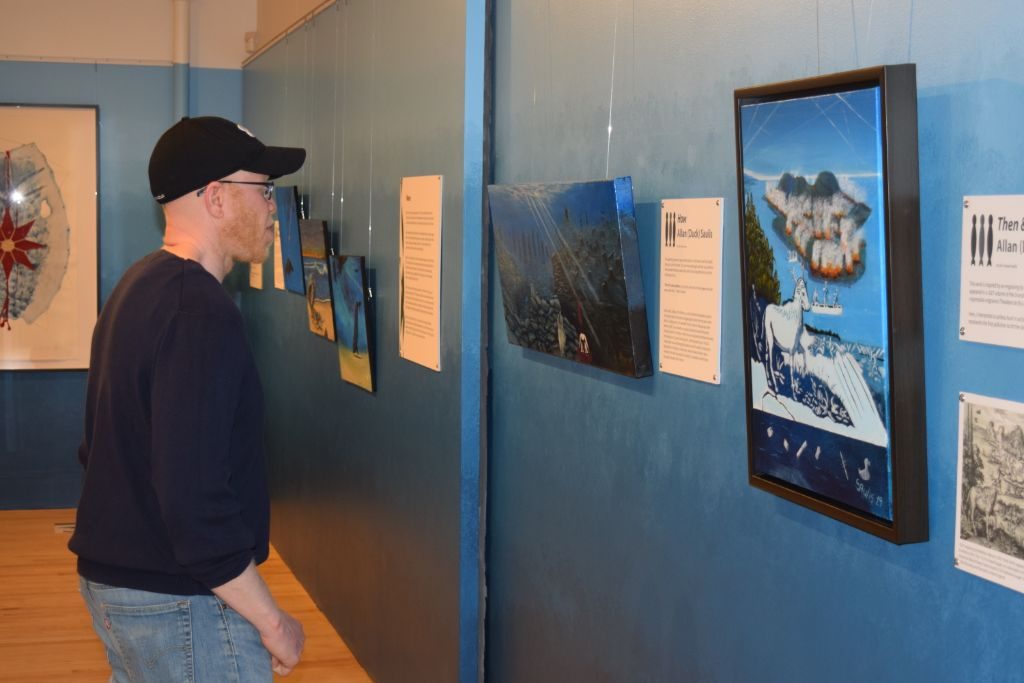 The exhibit features artwork from nine indigenous artists in a variety of mediums.

A Passamaquoddy, Frances, has deep ties to the Abbe Museum. Its exhibits feature many of her family members and mentors. She is the granddaughter of Molly Neptune Parker, a renowned basketmaker and co-founder of the Maine Indian Basketmakers Alliance. Formed in 1993, the group strives to preserve and maintain the historic art form.

Starting at age 7, Frances was taught basket-making through workshops and apprenticeships, taught by her grandmother and other community members. She began to learn the intricacies of weaving and material-gathering, harvesting sweetgrass and splitting ashwood into the fine pieces used as the basket’s structure.

It is a craft that requires dedication and commitment — attributes that were expected by her teachers. “My grandmother is so passionate about [basketmaking],” Frances remarked. “Her point of view is if you’re going to ask me to teach you, and you seriously want to learn, you are going to put in the effort and do it right.”

It took her some time to get the basics down, but once she did, she was set on learning more.

Frances’ newest piece, the pufferfish featured in “wolankeyutomon,” is the most recent evolution in a time-honored art form.

Departing from previous basket styles, the artist sees her work as more sculptural in nature.

“[The puffer fish] got me thinking about the continued evolution of basket-making,” she said. “What it can be, what we have the potential to make, and what kinds of statements we can make that are different from the statements we made in the past.”

In this way, the young weaver is making an ancient art form her own.