“There’s just so many things to learn about birds. In one lifetime you couldn’t begin to grasp it,” bird carver Wendell Gilley explains in a video featured on the website of the Wendell Gilley Museum in Southwest Harbor.

Forty years ago, the museum was founded to highlight Gilley’s wealth of bird carvings, his knowledge about birds and the artform of capturing them in wood. Back then in the early 1980s, the distinguished bird carver questioned whether constructing a building in his name was over the top.

Gilley wondered if the endeavor was too grandiose.

“He had a little anxiety about that,” recalled the museum’s first director, Nina Gormley, whose tenure spanned 24 years. “Wendell was very excited and appreciative that he would see his legacy go forward.” 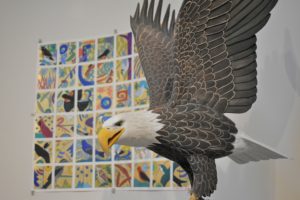 Over the last 40 years, thousands have flocked to the museum to learn about Gilley, all kinds of birds and see how nature and art are intertwined through exhibits highlighting both. Carving for over a half century, most of Gilley’s work on view are pieces that his wife, Addie, had the foresight to set aside over 50 years. They range widely from the late craftsman’s first bird carving — a miniature mallard drake created 90 years ago — to a bald eagle that greets visitors at the entrance.

“She had the foresight to put aside about 110 pieces of his work,” Gormley explained. She said many of those carvings were originally commissioned. If Addie decided to keep one, however, it meant her husband had to create another to fill the order.

A plumber by trade, Gilley sold his family’s plumbing business just before he turned 60, having decided to dedicate his life and creative energy to carving birds. An avid bird hunter, he learned how to prepare, stuff and mount ducks and game birds through a mail-order correspondence course offered by The Northwestern School of Taxidermy in Omaha, Neb. His former plumbing shop soon became a mini museum of his taxidermy creations. In 1931, a trip to Boston’s New England Museum of Natural History inspired him to try his hand at carving birds after seeing the miniatures whittled by Massachusetts carver Elmer Crowell. 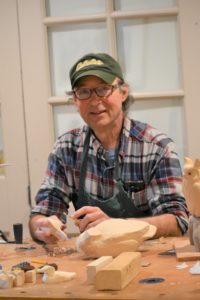 Steve Valleau recalls how Gilley encouraged him to keep honing his carving skills.

For 35 years, Steve Valleau has been the resident artist and bird carver at the museum. He remembers meeting Gilley, who encouraged him as a carver.

“He told me to keep trying,” Valleau said.

Gilley authored “The Art of Carving: A Guide to a Fascinating Hobby” (Hillcrest Publications Inc., 1976).

“I believe every human being has what I like to call creative power,” he wrote. “The secret is to learn how to release it.”

Once the museum opened its doors to the public in 1981, Gilley would come in and wander about anonymously in order to listen to people’s genuine reaction to the carvings. Eventually, someone would recognize him and Gilley would offer to sign a copy of his book — a successful way to finalize the sale.

As the teacher of the carving, wood-burning and mobile-making classes, Valleau has become the one cracking the secret code of students’ creative power. Over the last year, due to the COVID-19 pandemic, his instruction has been delivered in different formats. “Now with Zoom, there’s this whole community that only I knew about,” said Valleau, who taught classes throughout last summer under a tent outside. For many of the classes, the museum sent out kits of tools and supplies for participants to be able to carve from home. 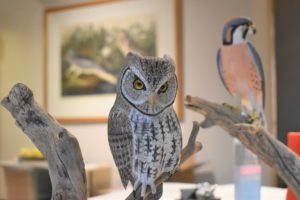 Over the last 40 years, the museum has not only introduced visitors to bird carving but also the myriad of ways birds can be highlighted through art and the skill of carving.

“This museum is dedicated to the art of bird carving, but it’s really so much more,” says Tammy Packie, who serves as the museum’s tour guide. “We have had visitors continue through [this] winter … It has been a mix of locals who have always wanted to come and several others who are recent transplants or stayed through this winter. Several of them have become members.”

“There’s just so many things to learn about birds. In one lifetime you couldn’t begin to grasp it.” — Wendell Gilley

Scheduled to open its doors May 14, the museum plans to stage exhibits canceled last year due to the pandemic. They include “Birds in Art,” a juried art show featuring 60 artists working in different media, which will be on display from June 15 to Aug. 14. “Birds in Art” has been a signature exhibit for 45 years at the Leigh Yawkey Woodson Art Museum in Wausau, Wis.

In addition, the Wendell Gilley will play host to the Acadia Birding Festival running June 3-6 (www.acadiabirdingfestival.com).

“This is the first year we’re hosting the Acadia Birding Festival at the beginning of June,” said Executive Director Sean Charette.

Swan’s Island artist Gary Hoyle is the focus of the museum’s show from Aug. 20 through October. For 28 years, the painter was an exhibits artist and curator of natural history at the Maine State Museum. He and his wife purchased a seasonal home on Swan’s in 1985 and moved to the island year-round in 2007. He strives to capture the essence of light in his paintings. 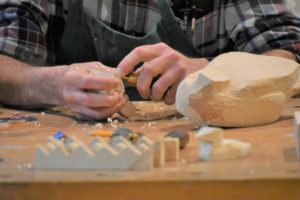 At the Wendell Gilley Museum, resident artist and carver Steve Valleau shapes a blue-winged teal from basswood. His association with the museum spans 35 years.

The museum is located at 4 Herrick Road in Southwest Harbor. Driving through downtown, it’s hard to miss the museum with the bright orange canopy, a prototype by Rockland artist Charles Duvall, on the front lawn. Classes and guest speakers are being held under the canopy throughout the summer season. Carving classes are being held under the canopy on Tuesdays and Thursdays. Museum hours are 10 a.m. to 4 p.m., Tuesday through Friday. Walk-ins are welcome as long as the museum hasn’t reached its capacity in keeping with CDC guidelines. Reservations for visiting are encouraged in order to monitor the number of people inside the museum at any one time.

“There’s going to be a lot going on and the best place to find it is on our website,” said Charette who strives to have programming for all ages. “Hopefully, people will see we’re a place there will always be things going on.”